Mike Raley, an Acoustic Engineer with Ecore, recently became Institute of Noise Control Engineering (INCE) Board Certified in the United States. Having an employee that is INCE Board Certified, analogous to Professional Engineering (P.E.) registration, demonstrates Ecore’s serious commitment to acoustics at a high technical level.
Dec 21, 2018

Ecore is pleased to announce that on October 12, 2018, a judge presiding over a case Ecore initiated against Defendants Pliteq, Paul Downey, and CSR, pending in the United States District Court for the Eastern District of Pennsylvania, entered summary judgment in favor of Ecore and against Defendants on seven counterclaims brought by Defendants and one claim brought by Ecore against Mr. Downey.

Arthur Dodge, III, CEO and President of Ecore International, has been elected Director of the Institute of Scrap Recycling Industries (ISRI) and Chairman of the ISRI’s Tire Chapter. ISRI, a non-profit trade association consisting of more than 1,600 private and public for-profit companies, promotes public awareness of the value and importance of recycling in the production of goods and services worldwide.

Anatomy of an IIC Rating

Ecore Will be featured on World’s Greatest May 2 & 16

Ecore, a company that transforms reclaimed waste into performance surfaces that make people's lives better, is proud to announce it will be featured on episode 227 of World's Greatest, a half hour television show featuring behind- the -scenes footage and interviews with some of the most amazing and unique companies, products, people, and travel destinations in the world. Airing May 2 & 16, this episode can be seen on DirecTV Channel 305, Dish Network on channel 250, or by going to http://worldsgreatesttelevision.com/tv_schedule to see what network the show will be on in your area.

Ecore, a company that transforms reclaimed waste into unique performance surfaces and manufacturer of QT sound insulation, is proud to announce that it is in the process of updating its ICC-ES Report ESR-1522. As such, 15 millimeter QT Sound Control Insulation (QT5015) is not included in Ecore’s current ICC-ES report ESR-1522.

Ecore, a company that transforms reclaimed waste into unique performance surfaces, has successfully settled a lawsuit against Paul Downey and Pliteq, a business that creates building products for commercial sound control. The lawsuit arose as a result of Pliteq buying Ecore products through third parties and selling those products as its own manufactured product.

Ecore International, a company that transforms reclaimed waste into unique performance surfacing, is proud to offer a new, premium, high-performance adhesive: E-Grip Evolve. This product is a proprietary, wet-set adhesive that is ideal for use with Ecore's
Sep 22, 2014

QT Product Line is Made in America Certified

Ecore International, a company that transforms reclaimed waste into unique performance surfacing, is proud to announce that it’s QT Sound Insulation is now Made in America Certified.  Made in USA Certified®, the nation’s leading third party independent certification source for USA-Country of Origin claims, provided the certification.

Ecore International and RB Rubber are pleased to announce that they have reached an agreement to settle all litigation relating to acoustical underlayment. Under the terms of the confidential agreement, RB Rubber has been granted a permanent, exclusive
Jan 15, 2013

Ecore International, pioneer of the recycled rubber flooring industry for over 20 years, is proud to announce its new “Redeux” material take back program. As an advocate for sustainable design and eco-friendly living, Ecore has developed Redeux to
Apr 01, 2011

Dodge-Regupol announced today that the privately held business with roots that date back to the mid-1800s has taken a new name – Ecore International, and has broadened its strategic and geographic focus. The company has operated as Dodge-Regupol
Jan 01, 2008 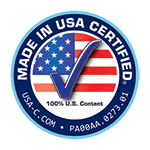